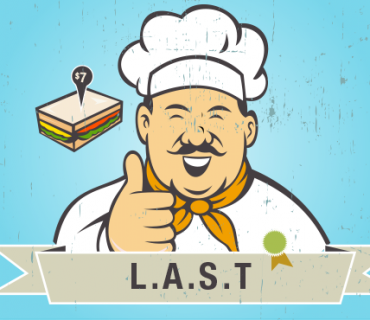 It’s amazing what you can learn about customer service at the most random of places! Just yesterday I went out to one of my favorite sandwich shops, Which Wich in Scripps Ranch, San Diego (for those of you who haven’t had a Which Wich sandwich, check it out as soon as possible, assuming you have one in your area of course!). They have great sandwiches, and each of them is about $7.

As I was waiting for my sandwich, which is made fresh and sent through a large oven to be toasted up for you, I got to talking to the manager Brian and started asking him questions about who founded the franchise, where their stores were located, their growth strategy, etc. You know, just questions from one business guy to another about how the company took off (I like to do that sort of stuff as I’m always curious about how other organizations do things).

Brian was extremely enthusiastic about Which Wich and his future with the company. He started telling me about how he met the founder at a company meeting and how great of a leader he was. He was raving about the way corporate management handled things and how they took fantastic care of their employees as they ramped up to over 450 stores across the country. I was all ears as I love hearing those kinds of success stories!

Well during our conversation, another customer in the store (who was waiting for his sandwich) quickly became irritated and interrupted our conversation to let us know his displeasure with things. It was sort of out of the blue for Brian and I, as the man looked pretty content sitting at his table when I first arrived. However, the awkward situation provided a great chance for me to see Brian’s problem solving skills in action!

The customer says, “You aren’t going to have 450 stores for long if you can’t figure out how to make a sandwich faster! I have been sitting here forever waiting and waiting, and I have to go already. Why is this taking so long?”

Wow – pretty intense moment for Brian as he just finished raving about how great the company is, and now he has to deal with an irate customer right in front of me!

So how does Brian handle it?

He calmly lets the customer vent, apologizes for the issue, explains that each sandwich is made fresh which is why it takes a bit due to the sandwich toasting process, and then assures the customer his sandwich is coming right up (which it did of course). He then proceeds to thank the customer for bringing the matter to his attention while he’s packaging up the sandwich and handing it over the counter to him. Problem solved, and voila — no more irate customer!

Pretty impressive, right? So after the customer leaves, I want to know the foundation for Brian’s problem solving strategy. Was that situation handled according to a plan, or was it just random people skills that got him through that tough moment? And that’s when I got my priceless customer service lesson for the cost of a $7 sandwich!

Here’s how it works:

A = Acknowledge or Apologize.

Now let’s see it in action:
Brian started by letting the customer vent. He never interrupted and looked the customer right in the eyes as he was complaining (thus the “L” for listening).

When the customer was finished explaining his displeasure, Brian calmly apologized for the matter (and there’s the “A” for acknowledge or apologize).

He then solved the problem by letting him know his sandwich was coming right up and that the reason it takes a little longer at Which Wich is because everything is done fresh in order to make the best sandwich possible (say hello to the “S” for solve).

Brian then finished by thanking the customer for bringing the matter to his attention, which let the customer know that his opinion mattered and that the company would address it moving forward (and we wrap it up with the “T” for thank).

Great job Brian! And lucky for me that I happened to be standing in the right place at the right time to learn the L.A.S.T. Technique first hand!